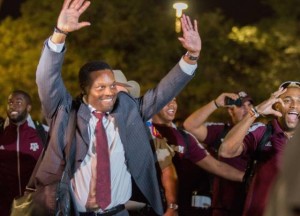 Ever since Texas A&M University was accepted into the Southeastern Conference (SEC), the matchup between A&M and the University of Alabama was always looming. Alabama went into the November 10,2012 game as the number one ranked school in college football. Even worse for the 15th ranked Aggies was that they had to play the Crimson Tide in Tuscaloosa, AL. Long story short, A&M beat Alabama at home and gave them their first loss of the season. This was the biggest win in Aggie football that I have ever witnessed and made for an extremely exciting football game to watch.

Around 9pm that night, while I was still trying to fathom what I had just seen, I received a phone call from the division of marketing and communications at A&M asking me to photograph the teams return that night from their away game. Of course I agreed, so I gathered my equipment with my intern and rushed to Kyle Field to meet a tidal wave of Aggies in maroon waiting for the team to arrive. I was able to capture many pictures of the excitement that was filling the area and then when the team arrived the crowd really erupted.   I also watched as the players and coaches walk down a sea of maroon of people and be congratulated for their big win.  Coach Sumlin and Johnny Manziel walked two feet past me.  It was awesome to be a part of this moment in Texas A&M history.

Feel free to link to this post, but please do not sell these photos.

Would you like me to photograph your sporting event?  Please get in touch!

Memory is such an important part of our lives. I never had the chance to attend Aggie Bonfire myself, but I heard stories of the 90 year tradition, and how it was a symbol of the Aggie Spirit…

Food and love always go together…

Texas A&M is not known for it’s ravers…