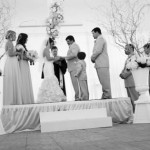 Several weeks ago I was asked by my friends at Cinema Candy if I would help them film a wedding with a Same Day Edit on May 12, 2012.  After enthusiastically agreeing, I rode with the crew and around half a ton of equipment to the small town of Livingston, Texas.  You can tell Livingston is in east Texas because of the friendly people and how half the town showed up for the wedding.  Igor from Cinema Candy and I filmed the groom playing golf at the local golf course, then went on to film the bride getting ready.  After filming the bride I hung with the groomsmen and filmed them while they played dominoes and waited on the hour to arrive.

The wedding itself took place at the bride’s ranch house in her backyard.  Her family had a massive tent constructed and the decor was phenomenal.  Speaking of phenomenal, the food was the best I’ve ever had at a wedding.  Even though it was 19 hours of filming, the day flew by.  My day began with filming the groom playing golf which meant holding on for my life to a speeding golf cart while filming.  After that I covered the bride and bridesmaids getting ready.  Once that was finished, all that was left was the groom getting ready and photos being taken by everyone.  The wedding was beautiful with me roaming around the ceremony getting Glidecam and slider shots of the proceedings.  While I filmed, Chad edited the wedding video and had it ready to show after the toasts at the reception.  I wrapped up the night filming dancing and the live band playing, before the bride and groom were sent off in a Rolls Royce. 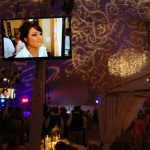 Most of my day was spent filming with a Glidecam, so all the smooth flying shots are mine in the video.  Chad of Cinema Candy edited the video in record time and we showed it on TVs to everyone at the reception.